I wanted to make it possible to show the temperature + time on a Raspberry Display. Before that I am going to try other little things so that I can get some experience. What I am now going to make possible is that text that I write in the shell as code will be printed on display.

( So that I know how to print text on the display )

For getting it to work I first had to get the latest BitWizard tool.

After a reboot add i2c in the group

To look if it is added:

At my it gave the result:

(Your list can of course be bigger or smaller. If it at least has the i2c everything is fine)

This code is for getting in the root, so that I don't have to type: sudo any more.

This is a handy command because many commands need sudo.

To install the i2c-tools you downloaded.

To make the raspberry in boot modes:

In the config.txt you have to remove the # from:

( you have to scroll down to find it )

When you then reboot the raspberry he will directly use the code. With the code he then knows he I connected to the i2c display. (To reboot you just have to type: reboot as I said before)

To finally look when rebooted if he actually can see him:

To check if it works. I will look if it show the location of the i2c.

Which should give as result:

reboot if it doesn't appear this can happen if you didn't activate the right code. If that doesn't help go to: "Change A: X to A: 94"

These steps are for to install the bw_tool 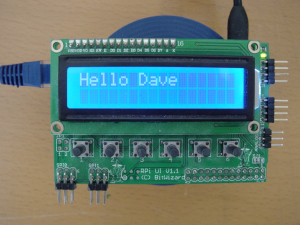 To remove all the printed text from the screen use the code:

(for other commands go to the the wiki from the user interface:

Read example: In write ports: If you have 0x13 – set backlight ( b has to be after the code to say that it is in byte )

To give a high backlight

To get a really low backlight. 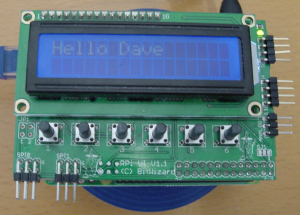 So now I have printed my first text on the raspberry display. Later I want to get with these the possibility to get a temperature visible.

I once experienced that rebooting didn't help for me getting to see A: 94. On my Display was the text visible: I2C_rpi_ui 1.6 A: 1 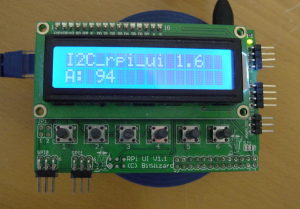 On the image you can see how it normally has to look like.

If you have A:1 you have to write:

When you do i2cdetect as above you will get the same result but than without the 4a visible:

but then without the 4a displayed on your screen.

After this command: remove and connect the display.

The above command is to reconnect the display.

Now it is fixed we can explore the things we can do with the Raspberry interface!

Note: At I2c the values are in hexadecimals and get divided by two. That explains why 94 is 4a in i2cdetect. If you want to change an address with an hexadecimal letter you can use capital and lower case letters.

Go to Blog 04, where I will make it possible to use the Raspberry interface as clock.