A bridge tournament consists of a number of rounds and short breaks in between rounds to allow the players to switch tables. The Bridgetimer counts down the time remaining for each round as well as the remaining break time and provides several audiosignals: 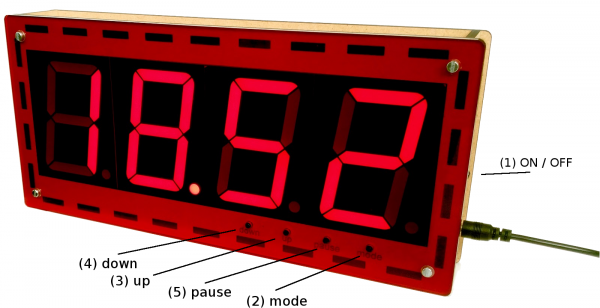 Within the box you will find:

The Bridgetimer is simple to use. Just plug it in with the supplied adapter, turn it on and it starts running the first program called "P1" at 10 seconds left of "change time". These ten seconds give you time to adjust the break time or to press the pause button (5) to pause the clock before the first round timer starts.

A different program may be selected by pressing mode (2) and subsequently either up (3) or down (4) in order to select the desired program.

The Bridgetimer may be paused at any time by pressing the pause button (5).

If the current break or round time needs to be adjusted at any point this can done by pressing up (3) or down (4) to respectively increase or decrease the time by 1 minute.

During break time the leftmost digit of the display will show a single moving segment symbolizing the players walking around. This way the difference between break and playing time can easily be distinguished.

Pressing mode will move to the next option. Any changes are automatically saved.

Unused programs start out at the default of 30 minutes playing, 5 minute warning and 3 minute changeover time.

To adjust the brightness of the numbers, turn off the clock, press and hold the pause button, and turn the clock on. The display should now show an "I" (from Intensity) as well as the current value. You may adjust (using the up and down buttons) from 0 to 99. The default of 33 seems good for normal use. During daytime or outside even brighter might be useful. Each up or down keypress adjusts the intensity value by 3 units. The lowest intensities will show a visible flicker in the display. Don't use those.

When you turn on the clock it will always start back at P1. The reason is that when for example there are two weekly events that require different settings, starting back up on the old settings guarantees that you will always start with the wrong settings active. Starting back at P1 all the time means we stand a chance of getting it right some of the time....

If you share the clock between two events that have different timings, I recommend programming the schedules for those events into P2 and P3. People who are not familiar with the clock will quickly adjust P1 to whatever event is then being played. If you know what you're doing you can even quicker just select the proper program. In my experience P1 gets messed up "by the other players" all the time.

The volume can be adjusted with the use of a small screwdriver, both flat and cross head screwdrivers may be used. On the back of the Bridgetimer a total of 4 holes can be found, the two uppermost are used to mount the Bridgetimer on a wall, the outermost is used for field upgrades of the firmware. The innermost (closest to the speaker) is used for adjusting the volume. As the circuit board and the potentiometer are positioned relatively deep within the timer, some effort may be required to locate the potentiometer. In order to prevent short-circuiting it is advised to search for the potentiometer only when the the timer is unpowered.

BitWizard is a small company headed by a bridge-playing CEO. When his bridgeclub wanted a new clock we build one.

We're not specializing in "bridge products" and we don't have the money to fund a big requirements interview among a large number of clubs. So we build what WE need and what we think you will find useful. If you feel something could be improved, feel free to let us know, we'll take it into consideration! It is entirely possible that due to a different way of playing a drive, your club has different requirements. We might even be able to help you with the hardware you've already bought in the form of software changes.

As mentioned above, we welcome feature requests. No guarantees can be made that we implement all of them, but we love to hear them.

Features that have already been requested and are currently being implemented are:

Also, if you think a device with four big numbers like this is useful in another context, be sure to let us know. It is entirely possible the hardware is already capable of performing the task and as specified earlier, the installed software can be switched out for something you require. So if you have an idea, let us know.

Feedback may be send to us by e-mail to info@BitWizard.nl .

(the geeks may want to read this, the others can safely ignore it).

The clock runs on 15V, not 12. The led segments require 12V of running voltage, and there needs to be some margin for the current source circuitry to work.

The USB port on the bottom can be used for upgrading the firmware.

The two PCBs inside are identical, only one is populated as the master, the other as the slave. (The slave can sometimes be another, older (or newer) model than the master, this will not affect performance).