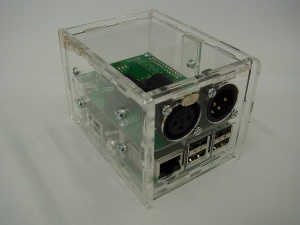 There is also a version "with FT245". That version adds the option to use your raspberry pi with our board as an Enttec USB Pro compatible device from another computer (raspberry pi or PC, Windows or Linux)

To build qlc+ on raspberry pi with support for our board, you need to follow the howto at:

but with one addition:

needs to be added after installing the prerequisites. Next, it seems the uart device is disabled by default: edit

to remove the hash on the line with "uart" so that it reads:

Next, you can build and install. Also use raspi-config to disable console output on serial but to enable the hardware. One more thing is to add the disable-bt and uart_clock to config.txt. See elsewhere on this page for the precise instructions.

The distribution ola works on Stretch. sudo apt-get install ola should do the trick.

Don't forget to disable login on the serial port (raspi-config) and to set init-uart-clock in /boot/config.txt. If you forget that last, you will notice that the "native-uart" option is not available when you try to add the universe.

The DMX harware uses the 3.3V, 5V, GND, RX, TX and GPIO18 signals. Besides that the non-FTDI version breaks out the SPI bus and I2C bus.