Difference between revisions of "SPI LCD" 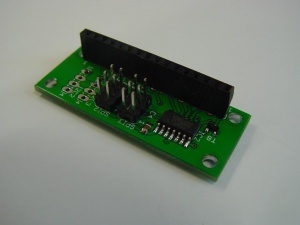 This is the documentation page for the SPI_LCD board by changing a solder-jumper.

The board comes fully assembled.

The board can also be configured for I2C operation.

The second SPI port can be used as an ICSP connector.


The second solder jumper connects "rs" and "vo" of the LCD together (and to one pin of the attiny44 controller on the board) in the default configuration.
In the other configuration, the pin used for SPI slave select can be used as the RS pin. This is used in the I2C configuration.

An example application is called "demo_lcd" and is available at [the bitwizard software download directory] . This appplication was written for the ftdi_atmega board from bitwizard, but can also be used on an arduino. But you'll have to download the hex to your board by hand after compiling.

For arduino, a sample PDE is available, called ardemo_lcd.pde, also at [the bitwizard software download directory] .